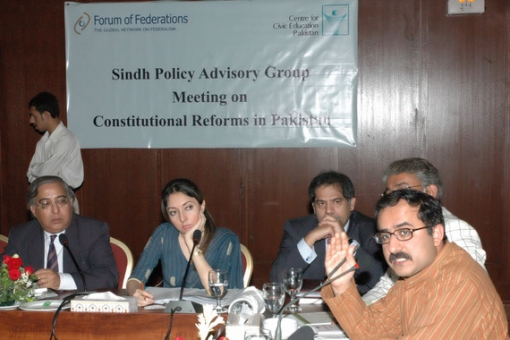 The general consensus was Pakistan, a structurally imbalanced federation after 1971. One province dominates all the state institutions and enjoys an absolute majority in the parliament over the other three provinces. This concentration of power in the executive branch has emerged as a major source of conflict in Pakistan. Senate can be empowered to ensure equal numerical representation and relative influence of provinces.

Participants highlighted the inherent flaws in the 1973 Constitution which are in contradiction with the true spirit of a federation. Amendments in the past have further distorted it by diluting its federal character. The constitution should be reverted to its true federal form and character or to frame an entirely new constitution, formulate on the lines of federations like Australia and Germany and also reflect the Lahore Resolution 1940. It was suggested to abolish the Concurrent Legislative List, giving administrative and fiscal autonomy to the provinces; revival of the Council of Common Interest to consider it a true representative of the federating units to resolve inter-provincial conflicts. Balochistan Policy Advisory Group on Federalism assembled on March 5, 2010 to discuss the process and promise of constitutional reforms. Participants, representing political parties, academia, civil society and students of Balochistan University, discussed prospects for change and the need for amendments in the Constitution.

Political parties advocated for a more powerful prime minister, parity between powers of the Senate and the National Assembly, giving identity to N.W.F.P as Pakhtunkhwa, more autonomy and more resources to the provinces, and reframing of the foreign policy according to the wishes and aspirations of all federating units. Political Leaders suggested redrawing provincial boundaries on ethno-linguistic basis and to rotate the election of the President and the Prime Minister among all federating units. Participants also called for educational reforms to recognise and promote the Pashto, Balochi, Punjabi, Sindhi and Seraiki as national languages. The Punjab Policy Advisory Group on Federalism met on March 10, 2010 in Lahore to engage experts and interested stakeholders from different walks of life on constitutional reforms issues in order to and evolve possible set of shared recommendations and desired amendments.

The discussion revolved around imperatives for constitutional reforms and prioritizing possible amendments. It was agreed that federal and parliamentary character of the constitution should be fully restored. There was a general consensus also on the question of provincial autonomy but with some differences on quantum of autonomy. Political parties mainly focused on the division of powers between the presidency and the prime minister and the issue of provincial autonomy. The representatives of religious minorities demanded the abolition of what they described as religiously discriminatory clauses of the constitution. Some participants asserted the need for making a new constitution.

A meeting of the Khyber Pakhtunkhwa Policy Advisory Group on Federalism was held on March 16, 2010 at Peshawar. Participants including parliamentarians, representatives of political parties, civil society and academia attended the meeting.

The participants lamented the mutilation of 1973 constitution by various actors, both civil and military, and stressed the need to restore unadulterated 1973 Constitution. The need for a new social contract keeping in view the Pakistan Resolution 1940 was also advocated. Participants were mutually agreed over federal and parliamentary character of the constitution, increase in quantum of provincial autonomy and enhancing powers of the Senate including in fiscal matters. Participants also stressed the independence of judiciary and parliamentary oversight in appointment of judges. A constitutional court to resolve disputes between federal and other units and abolition of Federal Sharia Court was also suggested.

Participants advocated to rename the province and proposed to recognise the regional languages as national languages by amending Article 251 of constitution. Changing current constitutional status of Federally Administered Tribal Areas (FATA) was discussed in detail. Islamic provisions and Objective Resolution, presently part of the preamble, into the constitution were also criticized by participants.